Victoria's performance of “The Star Spangled Banner“ is a favorite for many corporate, political, grand opening and University events. 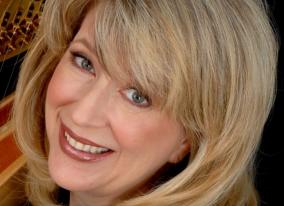 With the unique ability to accompany herself on either piano or harp, Victoria Lynn can provide entertainment in styles of music from Standards, Broadway, Contemporary, Celtic, Classical and New Age. She can provide a keyboard and sound system if necessary.

For her piano/vocal performance at Caruso's Palace, Victoria received the Entertainer of the Year Award.  She has performed Italian shows for events at the Universal Portofino Hotel, the Ritz Carlton at Grand Lakes, as well as Caruso’s Palace.

Victoria regularly performs as the featured soloist at Scottish Games, Irish shows, International Celtic Harp Festivals and popular events including the E.L.L.A Music Festival in Orlando, accompanying herself with the Celtic harp.

Victoria Lynn holds two Music Conservatory Degrees and has performed as vocal soloist with several orchestras. She has recorded ten CD’s that have been distributed internationally.
Her long list of credits includes National Awards in performance and songwriting, recordings, television, commercials, author, clinician and educator.

An entertainer who captivates her audience with her passion for music, her latest CD “Celtic Crossings” inspired a 5 Star Review from The Renaissance Magazine: “Probably the best CD of its kind . . . with aplomb and talent aplenty . . . unearthly vocals to convey a sense of wistful longing. . .” Richard Mackenzie.